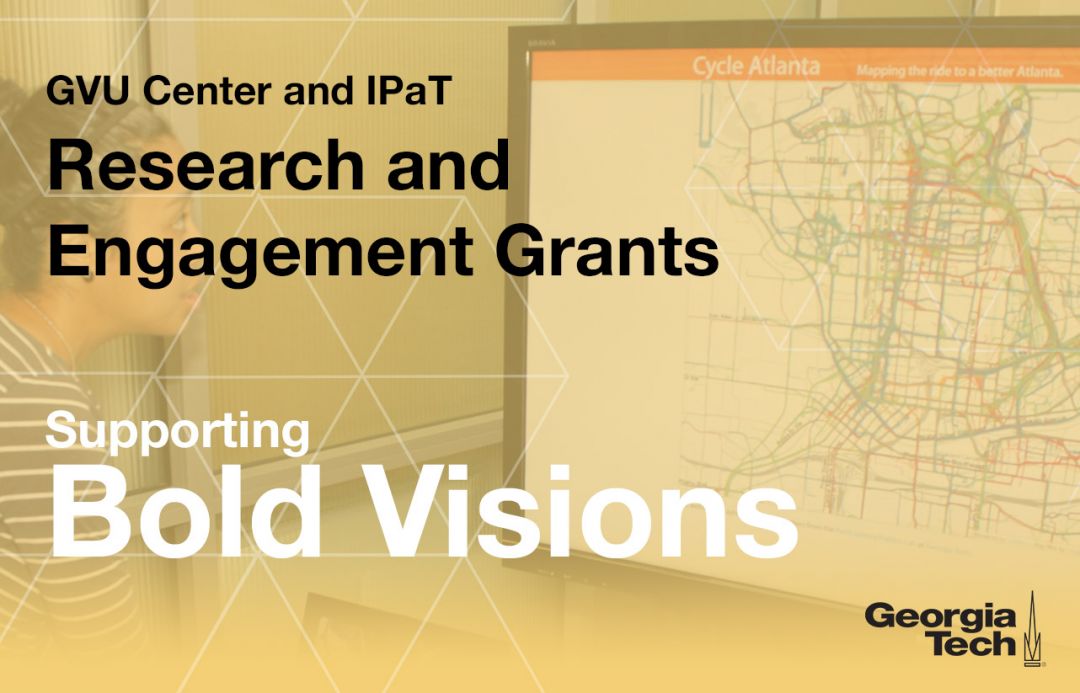 The nature of Black women’s presence in constructing and leading digital social movements has historically been rooted in a performative and narrative practice that consistently battle misrepresentation and erasure. As these movements work to evolve from digital hashtags into physical protests that yield tangible outcomes, issues emerge when centering Black women’s perspectives. Through an interactive case study of Tarana Burke’s #MeToo movement, we aim to engage the community in a critical dialogue surrounding Black women’s engagement in hashtag feminism through performance, emphasizing the use of collective narrative creation that weaves stories using the intersections of femininity and Black womanhood.

The Workshop on Language, Technology, and Society (generously sponsored by the Institute for People and Technology, the GVU Center, and the Atlanta Global Studies Center) builds an intellectual community focused on the science of language. In a welcoming style accessible to an interdisciplinary audience, a series of invited speakers from around Georgia and the United States present their original research on topics such as text-based computational social science; vector representations of word meaning; technology-driven documentation of endangered languages; and language change over time. We have hosted three speakers already; one (David Birdsong) takes place the same afternoon as this presentation (March 5) at 5pm in Swann 115; and three more are planned for later in the Spring (everyone is welcome!). This short presentation documents our growing intellectual energy.

In 2016, Georgia Tech collected preliminary data through an online survey of 771 students. The report found that 10% of Georgia Tech’s students responded being in need of food assistance and that 16% prioritized working at their job over academics and extracurricular activities. Georgia Tech’s actions to fill this gap include opening Klemis Kitchen in 2015, an on-campus food pantry that provides leftover food from the dining halls and Panera Bread as well as canned donations from other sources. However, in Spring 2019, only 100 students have self-identified and enrolled in the program; a far cry from the 10% of students estimated in the 2016 survey. To ensure both the highest levels of health and academic performance of all GT students, we need to understand the effects of food insecurity/security on health and academic performance, identify effective methods of recognizing students who are food insecure, and develop interventions to that will increase food security among those students who are food insecure. The purpose of this preliminary study is to address the first two issues. Our specific aims are 1) to understand the impact of food security/insecurity on academic performance and 2) identify passive tools that can predict profiles of food insecure students that are specific to students within a semester period.

Leveraging topics in popular media and culture can be a successful way to inspire students to pursue interests and skills in science, technology, math, and engineering (STEM). Robotics, space sciences, and gaming are some of the most popular vehicles to excite students about STEM and move them towards developing both the hard and soft skills, such as coding and team communication, requisite for success in these fields. Gaming and game design, in particular, have been a common way to motivate students to learn STEM skills, as game design requires a substantial amount of STEM knowledge to create, such as programming and math. Though esports (“electronic sports”) have existed for almost four decades, competitive online gaming is more popular and ubiquitous now than it has ever been. Esports at the high school level are incredibly popular with two primary leagues, the High School Esports League and PlayVS, representing more than 2,000 teams nation-wide and 170 teams in the state of Georgia for many of the most popular titles such as League of Legends, Overwatch, and Rainbow Six. Not only do esports present many of the same benefits for generating interest in STEM that gaming does, esports also serve to excite students in the surrounding ecosystem of what esports are. For example, students engaged in esports activities often learn web coding and hosting to support their own team websites, create promotional copy and media to generate hype on teammates, film and edit news clips for the school’s television station, and learn how to replace processors on lab machines for faster gaming performance. In this way, students are exposed to a whole suite of skills and career options in the gaming industry - other than strict programming - that includes production, video editing, team direction, as well as hardware, software, web, and network architecture.

While esports as a vehicle for generating STEM interest continues to appear highly successful, an existing challenge remains that educators and students are often less aware of the variety of variables that could contribute to their success in developing STEM skills. For example, both educators and students often have a lack of awareness of tools and programs that can be used, how to implement them, and exposure to careers that students can be motivated to work towards. This could negatively impact how and if students are advised on STEM career directions and skill development. For students that are under-represented and/or underserved already in their school systems and in STEM overall, this may be particularly harmful to their academic success and pursuits of STEM topics.

This talk will discuss a community engagement proposal that connects local educators, students, and industry professionals with Georgia Tech on the topic of esports as a STEM driving tool. By hosting workshops with schools, educators, students, and gaming industry partners, we seek to achieve three goals: 1) understand current challenges and barriers for educators and students in utilizing STEM motivators in their own schools, 2) increase stakeholder awareness of the current state of esports, including careers and requisite skills, and 3) give both educators and students hands-on contact with current technology and industry experts.

Artificial Intelligence in Interactive Digital Entertainment (AIIDE) is a yearly conference that brings together ~100 representatives from both academia and industry with a strong focus on digital game environments. Participants of AIIDE present novel research and discuss interesting problems in the area of human-centered artificial intelligence and interactive media. The conference investigates not just how to make intelligent machines, but how to produce transformative technology that impacts engineers, designers, and authors on potentially very large scale projects with broad cultural visibility. For the first time in its 20 year history, AIIDE was held at Georgia Tech from October 8-12, 2019. In this talk, I will briefly recap the highlights AIIDE 2019 and bring attention to the aspects the GVU Engagement grant allowed us to support.

This project examines the biodiversity of select animal groups around the EcoCommons and leverages existing quantitative (i.e. biodiversity and species richness measurements) and qualitative (species lists and dominant species) data to develop acoustic algorithms capable of monitoring wildlife acoustically. Our work will produce diagnostics that will be valuable in the design of lower power acoustic sensing devices and power measurements on the implementation of various acoustic algorithms. This work also sets the stage for efforts to examine city scale resilience by mapping biological diversity within cities and understanding drivers and corrective strategies. This aligns with efforts such as the 100 Resilient Cities, but also local groups such as Concrete Jungle, which maps local biological components in order to increase access to food and other natural resources to promote social justice and equity.

Lelia Glass is an Assisant Professor of Linguistics in the School of Modern Languages at Georgia Institute of Technology. She is excited to build the intellectual momentum of language science at Georgia Tech in collaboration with people working on language from all angles.

Haley Hart is a master's candidate in the School of City and Regional Planning. Her background is in non-profit fundraising, specifically in poverty alleviation, but here at Georgia Tech has focused on food insecurity on college campuses. Her research on Georgia Tech's food insecurity issues on campus begun Spring 2019 with an internship through SLS with Jon Sanford in the Center for Inclusive Design and Innovation and has now expanded to the GVU/IPAT research that encompasses student eating habits their perceived academic success.

Laura Levy is a human factors psychologist at the Institute for People and Technology at Georgia Tech and Research Director of GEAR (Gaming & Esports Applied Research) specializing in serious game design, augmented and virtual reality (AR/VR), and human-computer interactions research. Levy works on a a variety of gaming projects including the implementation of esports in schools to drive STEM skill development, the design and scientific evaluation of student assessment games with ACT, Inc., and augmented reality student STEM game applications with the Verizon Foundation. Levy has also worked with Atlanta area students on the Games for Change Student Game Jams since 2018.

Dr. Anne Sullivan is an Assistant Professor of Digital Media in the School of Literature, Media, and Communication at Georgia Tech. Her work focuses on the intersection of artificial intelligence, craft, and narrative. Her research borrows from a wide range of fields such as HCI, games, and design research, with a particular eye towards representation and inclusion of underserved communities in STEM. Dr. Sullivan has worked on several published AAA games, craft games, and playful interactive crafts, with her work being shown internationally, including the SAAM Arcade exhibit at the Smithsonian American Art Museum. In her spare time she creates quilts for her cats to shed on.

Matthew Swarts is a Senior Research Scientist at the Georgia Tech Research Institute.