The Georgia Institute of Technology has had three Academy Award winners in the past four years, all from the College of Computing.

Alex Powell, MS CS 05, the latest recipient of the Academy Award for Scientific and Technical Achievement, took the honor home in February for his work on Premo, an animation system adopted by Dreamworks in 2013.

The system brought a revolutionary change in animation at the studio, one that allows for real-time manipulation of 3-D characters and gets the tools out of the way so the creative process can remain the focus.

But Premo's future was not always predestined.

Powell and his team were still working to complete the software for use on How to Train Your Dragon 2 as the movie went into production. The fantasy sequel was the studio's most ambitious film to date and called for dragon-filled skies and many large-scale set pieces on screen at the same time.

The studio committed to the untested software with a multi-million dollar franchise and the gamble paid off. Dreamworks now uses Premo on all its films.

Powell says that what caught the Academy of Motion Picture Arts and Sciences' attention was how the software turned animators' work from "fast enough" into "interactive.”

“Instead of continuing to have animation software grow more sluggish along with much of the industry, my team and I re-focused on simplifying and building core technologies that would retain the quality but shift us towards a real-time, natural, direct pen- or touch-based interface,” Powell says.

Software that was once frustratingly in the way for animators simply disappeared. Before Premo, Dreamworks animators would often wait minutes to see a rough video of their work, and sometimes it was overnight before they saw what their animations actually looked like in motion. The fastest animators often resorted to working "blindly" in an effort to work around the sluggishness of their software.

Premo changed all that.

“My colleagues and I developed a new engine and new character technologies so that we could get film quality characters running interactively. Our engine used all of the hardware - multiple fast CPU cores, powerful GPUs, available memory, etc - at its disposal, and was designed to scale very efficiently as new hardware came out.”

The effect on the animation workflow was significant and worked out even better than Powell expected.

“It still amazes me today. There's something magical about being able to reach in and touch a 3-D film character and have it move directly in response to your touch. Doing this with production-quality 3-D animated characters is a huge achievement.” 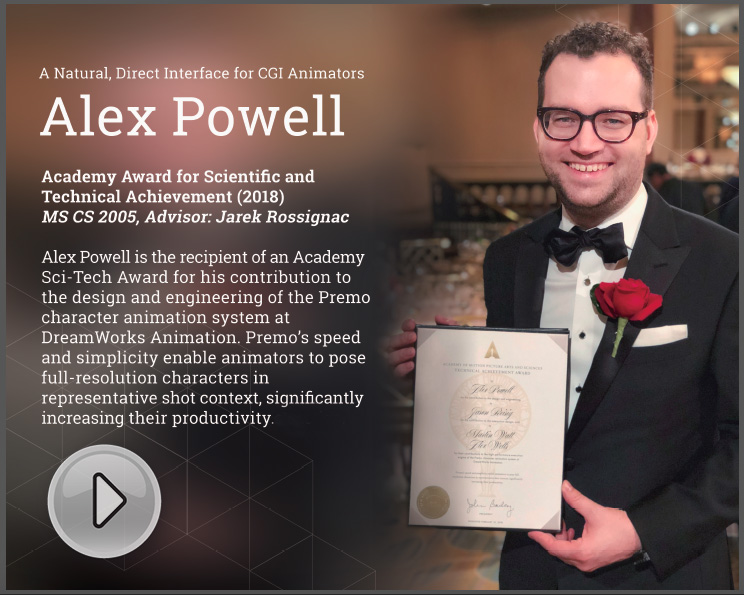 Powell shares a close connection with another Academy Award winner. He and Brian Whited, PhD CS 09, were actually roommates at Tech. They took many of the same classes and pursued building games and graphics projects on their own.

It started with Powell writing the music for a 2-D tank game that Whited did for a freshman project and continued from there, with the two always looking for ways to help each other go above and beyond.

In a class taught by Interactive Computing Professor Jarek Rossignac, who advised both alums through their college careers, students were required to implement the physics for a simple billiards game. The two took it several steps further, adding realistic graphics, reflections and shading in real time, an artificial-intelligence computer player you could play against, advanced physics with acceleration and spin, and a closed-form physics solver that could predict the paths of every ball until the entire shot came to rest.

Rossignac asked the overachievers to submit it to the College of Computing's UROC (undergraduate) Research Symposium.

“Jarek loves to teach elegant, simple solutions to complex problems,” says Powell. “I'm forever grateful to him, not just for breaking down problems in this way, but for showing me that most problems can be broken down and not to settle for the complex solution.”

Powell says he's always had a knack for practical engineering challenges, and he frequently helped others in the GVU Center take their projects from theoretical into implementation.

While in school, the industry had just started introducing programmable GPUs, which was a new challenge for many in GVU, according to Powell. He ended up starting GVU's first focus group for general-purpose computing on GPUs. The group was called GRAPE, or the Graphics Research And Programming Experiment group.

Powell started in the animation industry ahead of his friend, but Whited beat Powell to the Academy Award by a year for his work on Disney's Meander system, which Powell says is nothing short of astounding.

Powell had many options open to him after college but loved the idea of the animated feature film industry.

“I think of it as computer graphics in its purest form, where we still continue to build bigger and more ambitious films each year, requiring us to continuously improve to stay competitive.”

After nine years at Dreamworks Animation, Powell has now caught the startup bug and is pursuing that dream in San Francisco. His wife, Bridgette Powell, CS 10, also worked in the animation industry, where they met. Their first date was at a little graphics gathering called SIGGRAPH.

Alumni in the Visual Effects Industry

Many Georgia Tech alumni have influenced the direction of popular entertainment with their contributions to animation and visual effects techniques used in film, television and games. This diverse group continues to shape Hollywood and give credit to Georgia Tech and the GVU Center, where many worked and shaped their understanding of graphics work.

And the Academy Award Goes to... 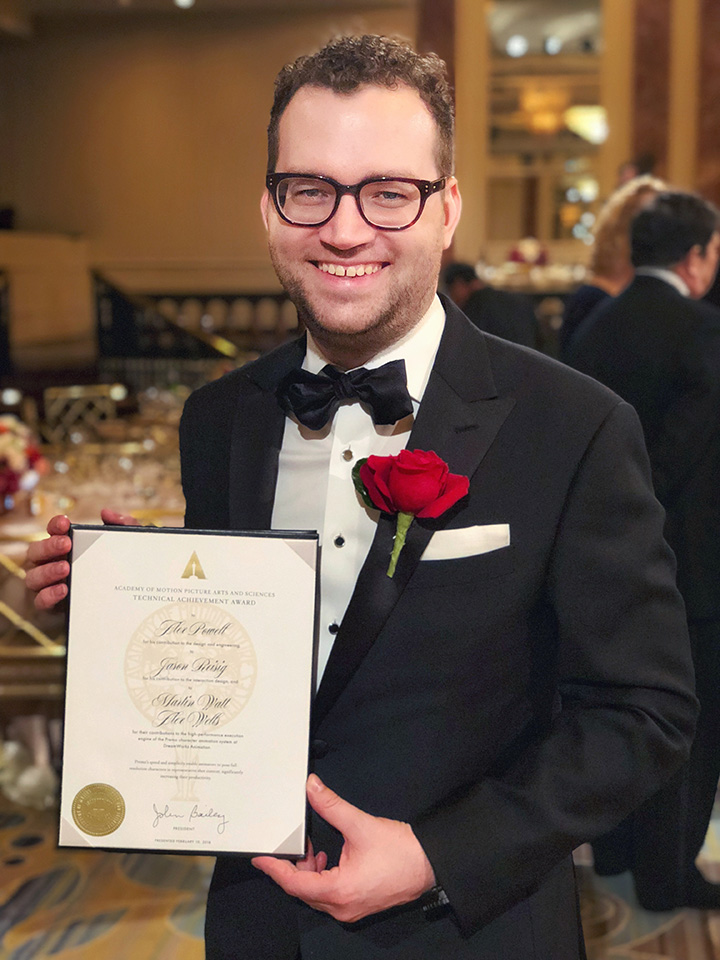 A Natural Interface for Animators 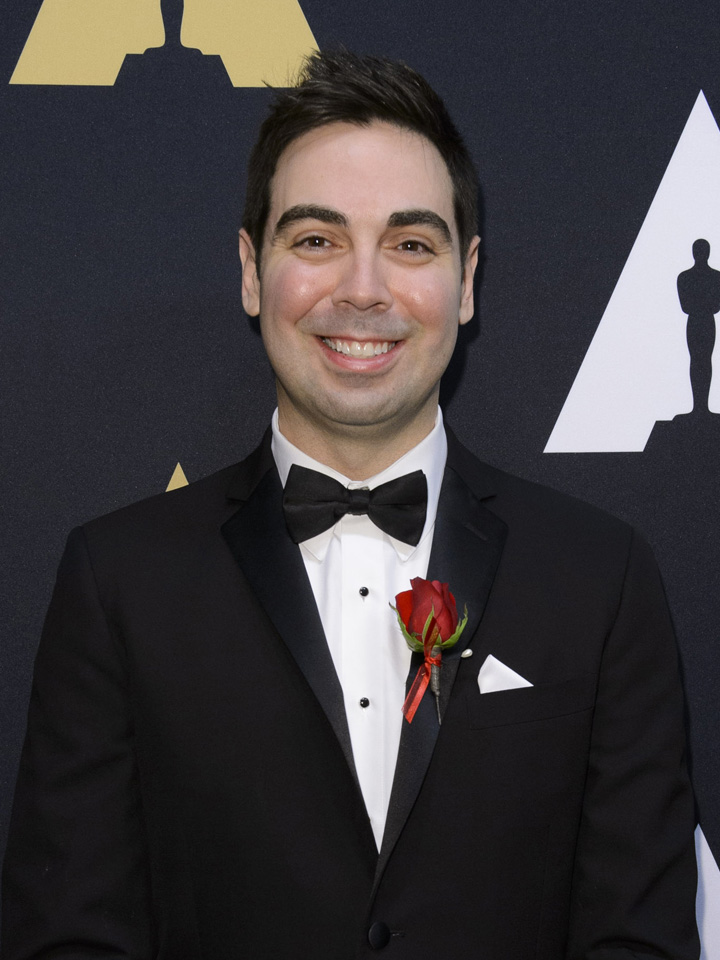 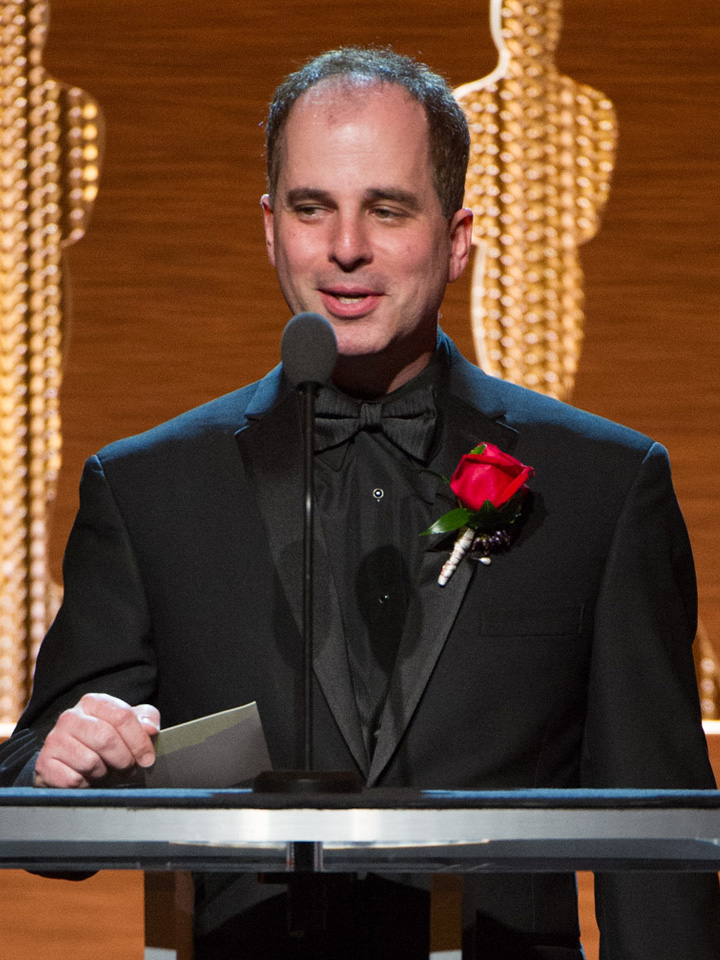 Demolition and a Movie