The Liar’s Dividend: The Impact of Deepfakes and Fake News on Politician Support and Trust in Media

This project is joint work between the Georgia Institute of Technology and Emory University.

We posit that the payoffs from the liar's dividend work through two theoretical channels. First, the allegation of a deepfake or fake news can produce informational uncertainty. After learning of a political scandal, a member of the public will be more likely to downgrade their evaluation of the politician or to think that the politician is a "bad type." However, if the politician then issues a statement disclaiming the story and alleging foul play by the opposition in the form of a deepfake or fake news, then some members of the public may be more uncertain about what to believe. Compared to a counterfactual where the politician makes no so such allegation, we think claims of a deepfake or fake news will result in aunidirectional shift in average evaluations of the politician in the positive direction, along with an associated increased variance (a reflection of increased uncertainty).Second, an allegation of a deepfake or fake news can provide rhetorical cover. To avoid cognitive dissonance, core supporters or strong co-partisans may be looking for an "out" or a motivated reason (Taber and Lodge 2006) to maintain support for their preferred politician in the face of a damaging news story. This rhetorical strategy also employs a "devil shift"(Sabatier, Hunter and McLaughlin 1987) where politicians not only signal their own innocence, but also criticize political opponents and the media, prompting supporters to rally against the opposition.

To evaluate these potential impacts of the liar's dividend and the channels through which the liar's dividend bestows its benefits, we use a survey experiment to randomly assign vignette treatments detailing embarrassing or scandalous information about American politicians to American citizens. Our study design, treatments, outcomes, covariates, estimands, and analysis strategy are described in more detail in our pre-analysis plan, which was pre-registered with EGAP/OSF. 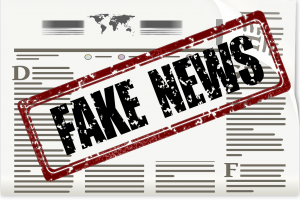