Graduate students at the Georgia Institute of Technology have created the ultimate cheat sheet to the Marvel Universe. They scaled the comic empire down to the 250 comic characters with the most appearances over 77 years and built an interactive graph that shows the connections among iconic superheroes and villains, all in one screen view. Users can search for their favorite character, and after a quick primer from a video tutorial, they'll be on their way to catching up on several decades worth of comic crossovers and clashes. The interactive graph, which is still a work-in-progress, is available here (wait several seconds for the circle graph to load before using the search field).

The team of four, all graduates of the Master's of Human-Computer Interaction degree program, had access to more than 40,000 characters and their historical data from marvel.com, marvel.wikia.com and Marvel's API. They took the 1,400 characters listed on the official Marvel site (who have appeared in over 30,000 comics) and visualized which characters have appeared together and how often.

Connections that only fans might know become immediately apparent. Iron Man, for example, turns out to have shared comic pages with as many X-men as he has Avengers, if not more. 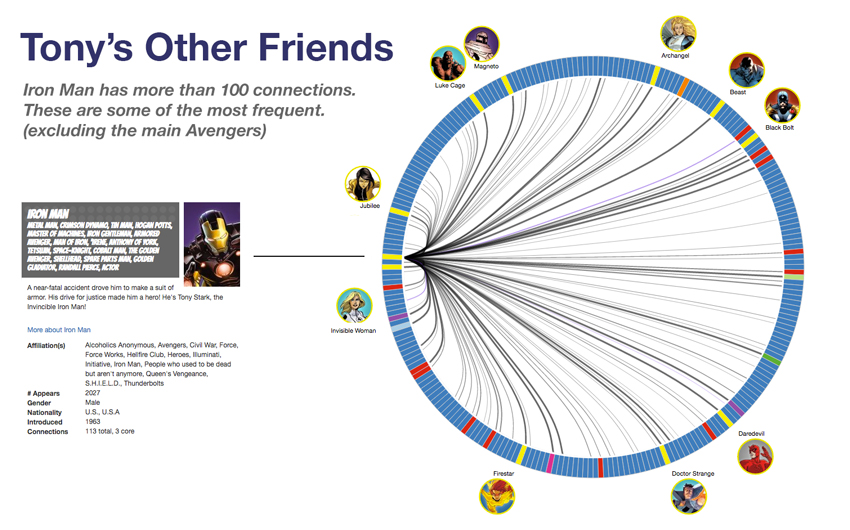 Picking a hero or villain allows the user to see a series of lines connecting the selected character to all the other characters who have appeared in the same comic book issue. The more joint appearances, the thicker the line. A slide filter narrows results to display only the most prevalent connections.

The interactive graph – developed for a course taught by John Stasko, professor of Interactive Computing and director of the Information Interfaces Research Group – provides an encyclopedia's worth of information in the single interactive view: biographies, number of appearances, date introduced, nationality and sex. These attributes can be filtered, sorted, and color coded to show unique views. The students, who have since graduated, plan to keep the project alive, and have shared project details and code for any other fans who want to tackle the data.

“Getting a sense of the Marvel universe overall can be a daunting task even for the most stalwart of fans,” says Rachel Sheketoff, one of the developers, who graduated this spring. “We wanted to make discovering relationships a fun and intuitive process.” 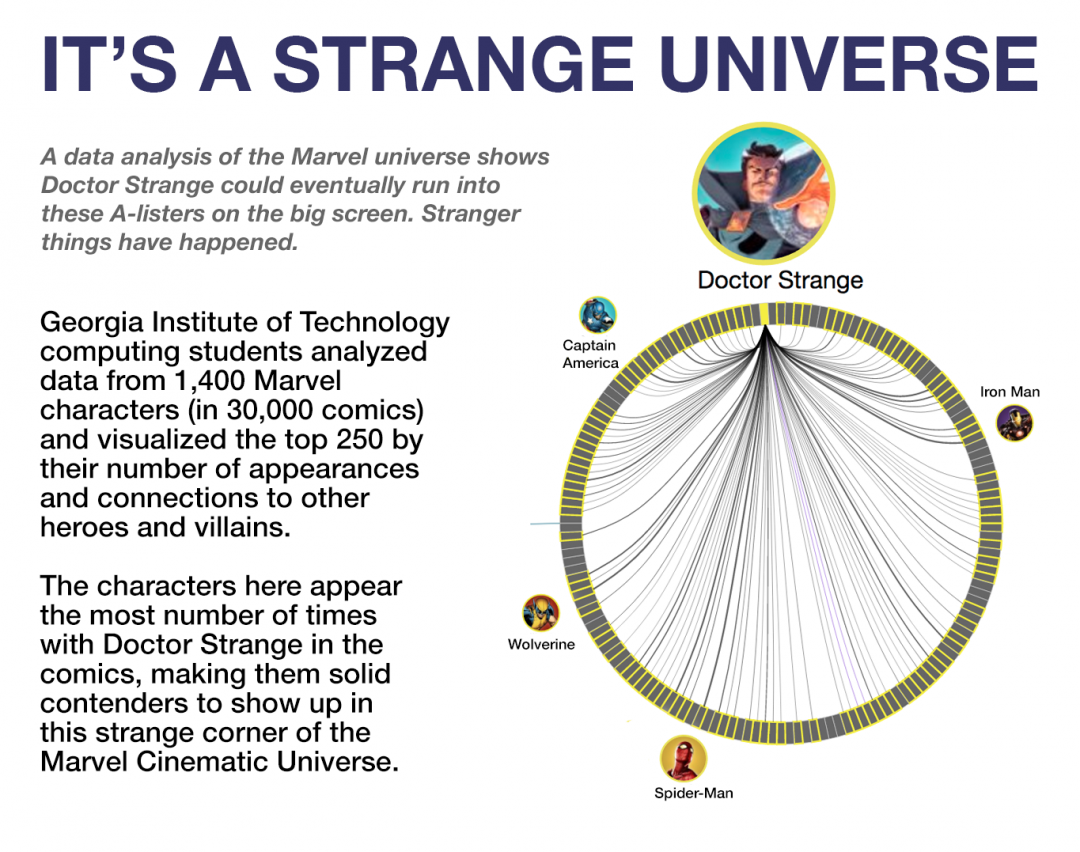 The Marvel universe – diverse in its range of hulking heroes, mystics and aliens – has a rich but complicated history. The visualization is designed to foster an intuitive exploration of its fictional characters. A few minutes of interaction might be enough to get any superhero fan excited and making guesses, for example, on who might be featured in this weekend's premiere of the Dr. Strange film or who The Defenders might be fighting when the team's Netflix original series debuts with Luke Cage, Daredevil, Iron Fist and Jessica Jones next year.